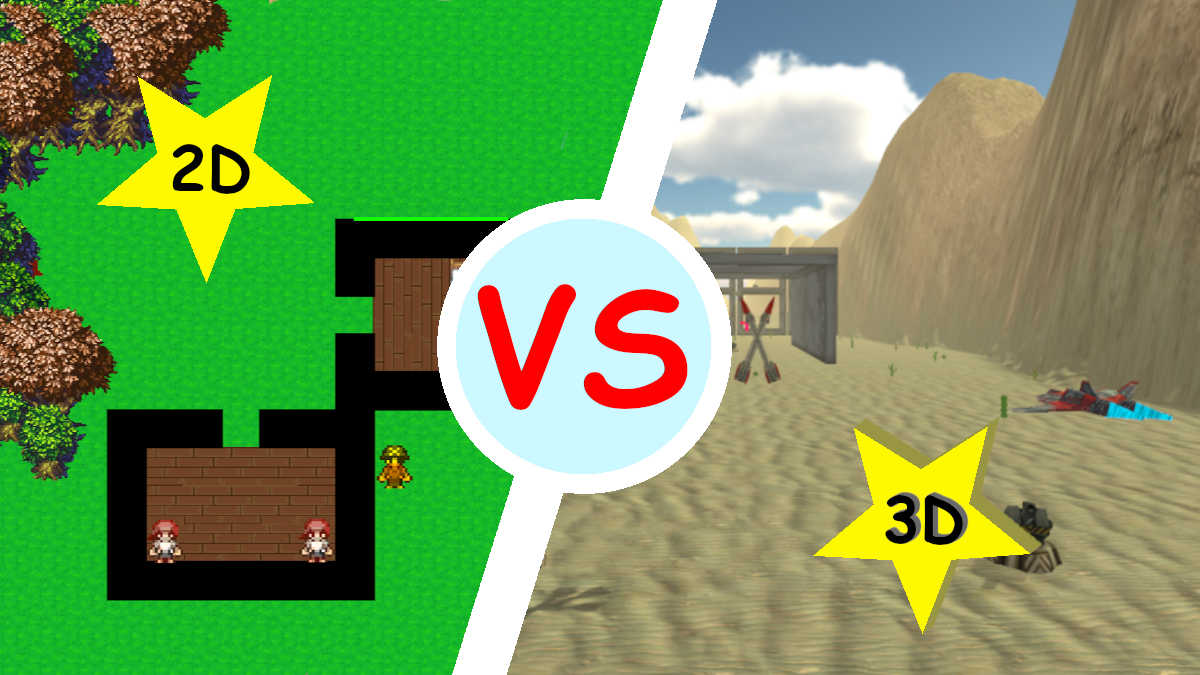 When making your next game, explore the differences in making it 2D or 3D. Consider the pros, cons, and your vision for the game before getting started.

A lot goes into the decision to pursue making a 2D or 3D game. Is it easier to make a 2D game? Will a 3D game be more fun? What art style matches the final vision for the game? Before developing a video game, one of the first choices you will have to make is whether to make it 2-dimensional (2D) or 3-dimensional (3D). Before the late 1990s, almost every game was developed in 2D. This was mainly due to the limitation of the graphics and CPU power of the gaming devices available at the time. However, computers today have enough power to render 3D games, so computing power is no longer the stumbling block to developing 3D games.

In this article, we will discuss some of the basics for developing 2D and 3D games to help you know which of the two is easier to develop and why. But first, let’s look at the core differences between 2D and 3D games.

What is the difference between 2D and 3D games?

2D games use flat graphics, so the characters and all the scenes in these games are rendered along two axes. These flat graphics are usually referred to as sprites. On the other hand, with 3D games, characters and all the objects in the games are rendered on three axes. Because of this, 2D and 3D games are visually different and offer a different gaming experience. These significant differences make it quite important to choose right when you are at the very beginning of making a new game.

3D games offer a more massive experience since the scenes are more realistic, just like movies. You could easily mistake a video game session for a movie if you are not told that there is someone playing it. 2D games are basic and not as complex as 3D games, which makes them much easier to play. Before the smartphone era, most of the games that we played on our phones were 2D games. This includes the famous Snake game on Nokia phones.

2D vs. 3D games – which ones are easier to develop

With 2D games, the developer only has to deal with two axes when developing characters and the different scenes of the game. On the other hand, 3D game developers have to add depth to the game scenes. This makes 3D games harder to develop. 2D games are much easier to create, but developers are limited to fewer possibilities that they can add to the game when compared to 3D.

In terms of development costs, 3D games also require more resources and a relatively bigger team. The development duration can also be longer for 3D games since the work needed to have the games playable is usually way more than for 2D games. It is worth noting that most players prefer playing 3D games, so the extra effort involved in creating these games can be worth it.

It makes more sense for new game developers to start with 2D games since they are much easier to develop. Starting with the simpler 2D games allows them to master the basics of game development before advancing to developing the more sophisticated 3D games. The good news is that popular game engines such as Unity support the development of both 2D and 3D games.

If 3D games are objectively better than 2D ones, then who plays 2D games? Most people who play 2D games love them because of the retro vibe they bring. 2D games are also relatively easy to play since they have fewer controls and possibilities than 3D games. Most people just getting started with gaming can easily play 2D games without finding many hiccups. If your game is targeting an audience which casually plays games or is new to gaming, making a 2D title is worth consideration. A friendly and approachable puzzle game might make sense as a 2D game, but the same players might struggle to keep up in a hyper-realistic virtual reality environment.

Another benefit of 2D games is that they are small and much easier to download and install on user devices. For casual gamers, the size of the game alone can be a deal breaker, so they may sometimes favor 2D games just because of their size.

There are pros and cons for both 2D and 3D game development. 2D games are much easier to develop, so they take less time and require less financial investment. Unfortunately, they are less immersive and limit the experience the developer can create with the game. 2D games are a good choice if you are just getting started with game development or if it matches the style you are seeking. However, if you are an experienced developer who wants to create the best gaming experience for your audience, pursuing a 3D game can be the best choice.